If you spend your driving days in cities or towns, you know how easy it is to pull over for a cup of coffee.  You can’t do that out here on the vast open prairies of North Dakota.  You can, however, pull in to a small town such as Halliday, just off of Highway 200 in Dunn County. We did that one Sunday afternoon in March, early spring. 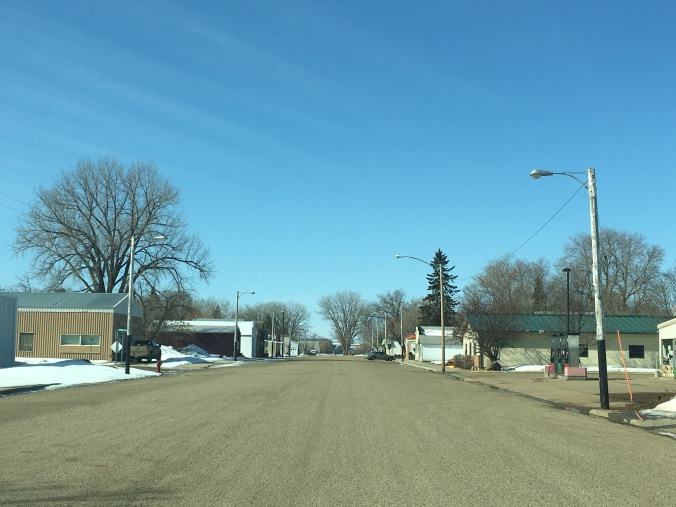 Jode O’s was open, and the coffee was waiting for us.

It’s a traditional small town family cafe, right down to the swivel stools at the counter, and that’s where we perched ourselves.  Coffee coming right up!

Jode O’s is quiet and comfortable. Half of the ownership waited on us at the counter.  Sometimes she was in back cooking when an order came up.  The other half of the ownership, an oil field businessman was at the center table — approachable, talkative and friendly.

There’s no doubt that Halliday once was a noisier town with a lot of hoopin’ and hollerin’ goin’ on. It is past those busier days.  Highway 8 clips the eastern edge of the town.  Before the Army Corps of Engineers flooded the Missouri River Valley, Highway 8 was a major thoroughfare from the Canadian border to the Black Hills. Traffic dried up when the lake took over the valley.

Now, oilfield workers live in town, and some of the long time residents of Halliday work in the oil field.  So, oil has 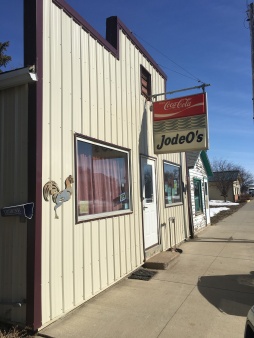 been good for the little town, and that’s something to holler about. 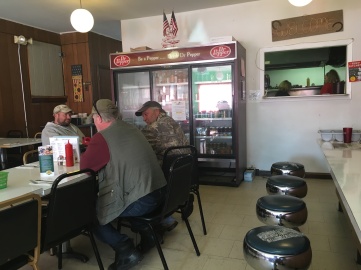 The hand-written daily special menu advertises what is good, such as the apple-pie filled pancakes.  We didn’t try them since we were there for only coffee, but it’s on our list of things to try next time we’re there and it is the special of the day.

We thought it humorous that the handwritten menu also lets us know there are a few items that are not currently available. 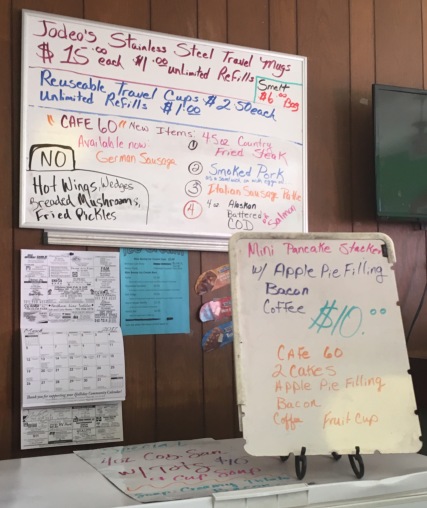 Next time we’re in Halliday, we aim to make it a mid-week stop to see if we can catch all the latest news of the town shared at the center table in the middle of the cafe.    If we miss it, we can always get the latest happenings from the town crier hollering on the street corner, or as it is now, the quiet little entry bulletin board. 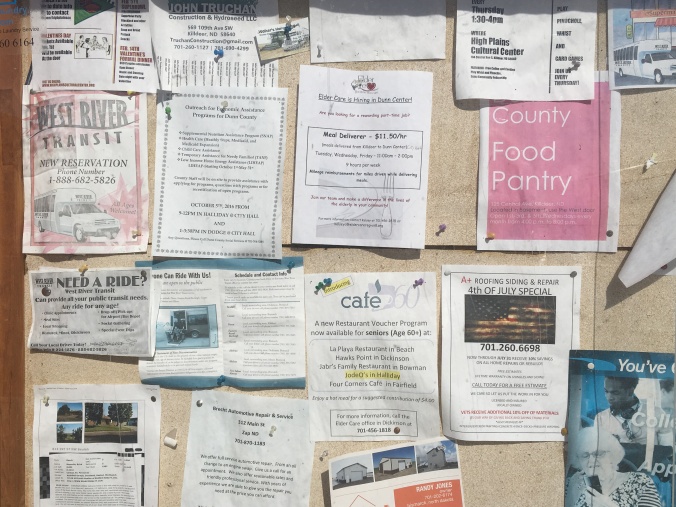 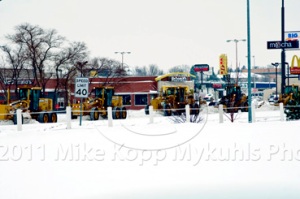 Here they come. Bismarck’s Street Crew is standing shoulder to shoulder to clear out Highway 83 in Bismarck.

The army of snowplows takes precedence over general traffic to clear a route out of town toward the north.  It’s the first leg of clean highway that the state and city keeps open so that power plant and coal mine workers can get to their jobs.

I was leaving town to head back to Wilton when I saw the street brigade headed my way. There was no way I was going to get out in front of them because traffic was too heavy. So, I consigned myself to follow them north and take a few photos as I went. 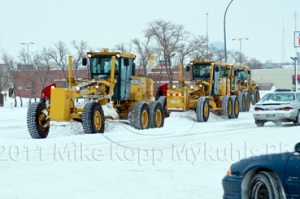 As in any city with multi-lane streets and highways, there’s no place to pile the snow should one plow be sent out. So the plows take all the snow from across the lanes and move it off to the ditch.  And to do it without causing traffic accidents with the large windrows of snow down the street, the road graders do it in one concerted move. 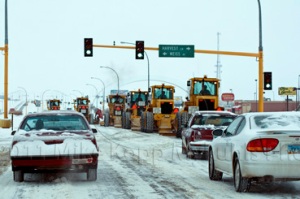 Of course it means a few drivers will be inconvenienced for a few minutes as the plows do their job.  But it’s worth it. They leave behind clean and safe streets.  How well does your city crews keep open your streets?  Good? Bad? Medium? 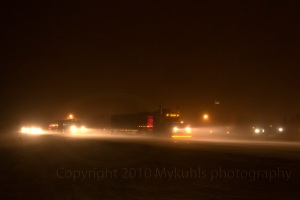 Wow. Winter didn’t pull any punches with its introduction. It hit us hard, and it’s still two months until the first calendar of winter.

The blizzard rolled all day and tonight it’s slow going on Highway 83 at Wilton.  Trucks are still doing their thing, but a few have decided it’s not worth it. So, they pulled in to the Wilton Cenex truck stop. 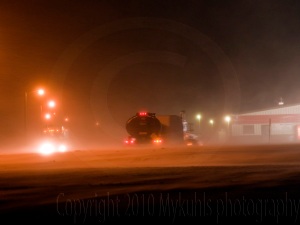 I wasn’t sure what I’d find to photograph when I went out, but had hoped to catch some snow plows working Highway 83.  I gave up after about 10 seconds. I’m not used to this cold, yet.  So, I captured these images to show what we are in for until spring.

In a way, I find it a bit exciting to be challenged like this by winter, but it’s also groan-worthy because I know it’s going to be a long winter ahead.

And just as conflicted as I am about winter, I’m conflicted about the Wilton City street crew.  Yes, they do a great job of clearing the streets,but dang, a full 6 months of this is gonna be hard on my back — cleaning out the end of my driveway every time the snow plow goes by. 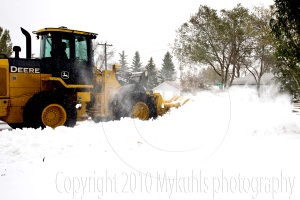 The morning after the night before

(Actually, this shot belongs with tomorrow’s entry, but I thought it was fitting to put it here to give a glimpse of the “aftermath” of this Intro to Winter 101 course.) 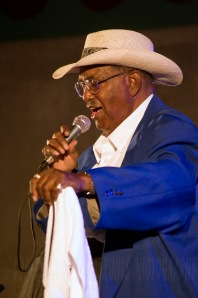 Blues on the Red.  Grand Forks party on DeMers and Big Walter Smith was there to entertain. Grand Forks puts on the regular event each summer and it’s worth attending.  On this night the electrified Chicago/Delta/Mississippi blues of Big Walter Smith attracted the crowd on a perfect weather night. 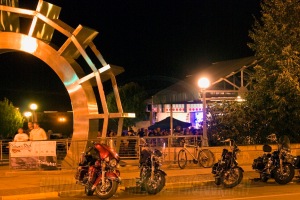 Motorcyclists joined the eclectic crowd of beer drinkers, bar-b-que eaters and blues lovers for a celebration of summer — one of those rare nights when the mojo is working and the black cat is strutting. 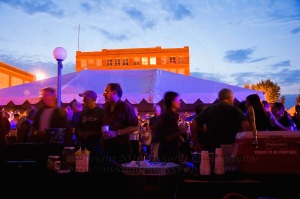 This time of year, the sun is still lingering as it descends in the west, and the crowd packs in to the park to enjoy a brief moment of  those lazy hazy days of summer.

After the Red River destroyed much of Grand Forks in the Big Flood/Fire/Blizzard of 1997,  the city was re-built with a flair and design that is perfect for good easy culture such as Blues on the Red.  A good ride to Grand Forks, a good night of entertainment, good food and good weather made this a memorable trip of 2010 for me.

The music as good as any I’ve heard all year. The photo ops were supreme.  The trumpeter in Big Walter Smith’s band was far more than an accompaniment. He was a show all to himself. 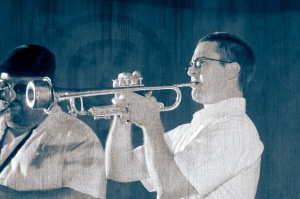 And when the show was over, there was still plenty of energy and opportunity to wander the streets along the Red River in Downtown Grand Forks.

And so wandering was on order for the rest of the night, visiting some of the more collegiate and more cosmopolitan establishments in the rebuilt section of town along DeMers Avenue. 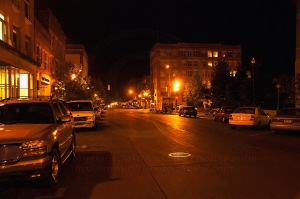 DeMers Ave on a Sat night 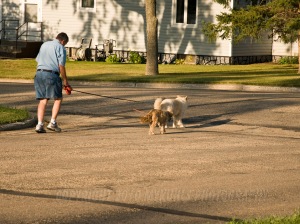 Man and his two best friends

A summer evening’s walk puts three friends together in different combinations.  Late in the day, about 8 p.m. a man takes his two friends, (best friends ?) for a walk down Louise Avenue, the street on which I live in Wilton.  I see these three walk every evening, a ritual that is good for all three. 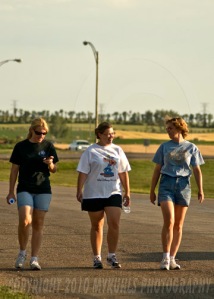 Others walk in the evening, too.  I drove out of my home after photographing the man and his dogs, headed to the highway on the outskirts of town to find three more friends on an evening stroll.  It is one of the most pleasant and healthy rituals these people can adopt.  A small town such as Wilton allows them plenty of room and safety for their ritual.  No gangs, no thoroughfares, no traffic congestion, just a pleasant stroll anywhere in town. 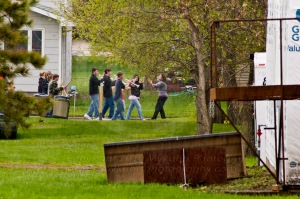 Remember these days?  If you were in marching band, you remember that one class period every day you practiced marching to a drum cadence, following the band instructor or majorette who was supposed to keep the band in an entertaining mode.  And if it rained on that one class period, too bad. You still marched, especially if you had to get ready for an upcoming event such as Bismarck’s Band Day marching band parade. 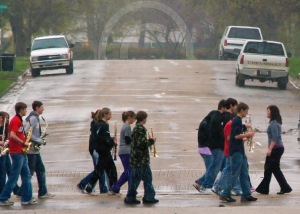 That didn’t make it any more pleasant for these musicians.  It seems the guys were too put off by being called on to tough out the rain, but look closely at the faces of two of the girls, the one walking backwards in the grey shirt and the clarinet player just to the left of center.  They’re scowling.  A bad hair day, I guess. 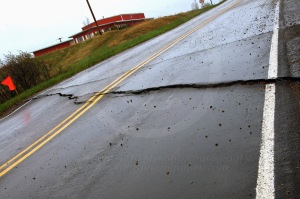 Winters are brutal on North Dakota’s infrastructure, but it’s generally not until spring when the damage becomes apparent.   The pavement of this country road on the edge of Washburn took a hit, part of it sinking with the wet spongy soil below, leaving the large crack. 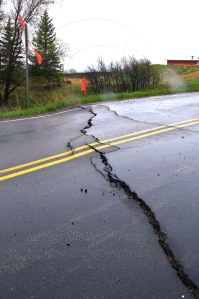 North Dakota’s road crews, state, county and city go non-stop through the summer to repair the damage left by the freeze-thaw cycle and the unpredictable spring rains.  In the winter cold everything shrinks.  In the summer with the heat, everything expands.  That kind of movement is tough on what is supposed to be a hard surface.  In this case, the grade below the pavement washed out with the spring rains.

It’s going to take a fair amount of money and time for the local municipality (Washburn) and McLean county to repair this break. 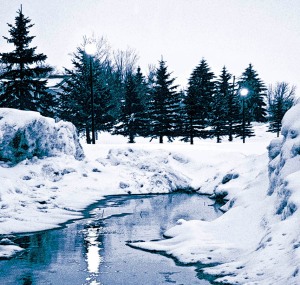 Wise to the dangers of streams under snow, I was delighted to see that unmistakable sign of spring clearly on top of the snow, eating it up as it flowed to Wilton’s Centennial Park.  The stream formed from the gutters of Wilton was full and melting more snow as it coursed in to the pond at the park.

Where it entered the park, I shot its late afternoon/early evening erosion of snow.  Unlike the day before, I wasn’t about to try to cross the stream as it ran below the snow cover.

An easy shot, a few quick Photoshop filters and my day’s hunt was done. 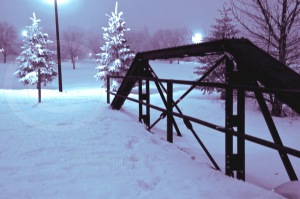 The night produces a landscape of a different shade or coloring.  Wilton’s Centennial park, a short two-block walk from my house is an attractive destination on an evening stroll.  The pony-truss bridge moved in to the park is a pedestrian bridge now, though before it was moved it carried families and farm equipment across a nearby creek.  On this night, it had one set of foot prints. 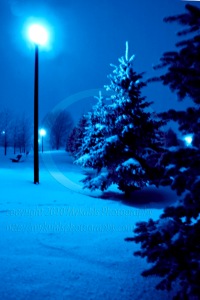 I used my tripod, kept the shutter open and tried several angles and several shots to capture the glow of the park.  Generally it has an orange or yellow glow similar to the photo above, but once I process it to give it a visual personality, the blue tones in the photo to the right seem to suit the image, giving it that crisp clean cold look that you can feel. 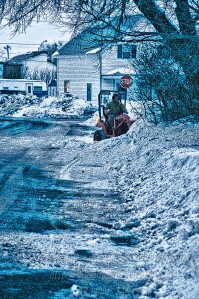 By the middle of February, it’s tough to find new and different ways to shoot winter as it is in North Dakota.  Take this guy using a garden tractor to widen the approach in to his driveway.  For me, the shot was just any other shot, but I played with it in Photoshop to give it a look that represents my ‘impression’ of winter in a small town…gritty, grainy. 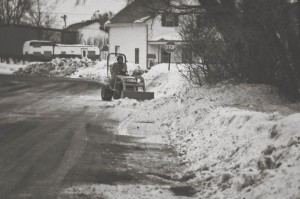