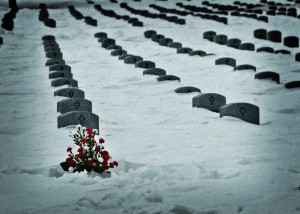 Somber. That’s the only word I can think of that universally applies to every visit I have made to the North Dakota Veteran’s Cemetery.  Somber.  A sense of quiet pervades, even when we roll in on our motorcycles on a funeral escort detail.  So, in February, somber, the 12-month sense is even more pronounced when the tombstones are barely visible above the snow;  a bouquet of flowers on the grave site of a veteran barely makes a difference in the cold arrangement of the dead.

On this day, I wanted to not only snap the photo, but also give it a post-processing treatment to represent the somberness of the cemetery. 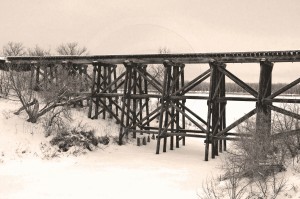 Down the road, south of Mandan is the abandoned Mandan to Mott rail line.  The trains are gone, the tracks are gone, but the wooden trestles remain.  Through the last couple of centuries, even before the two Dakotas were established and there was only a singular Dakota Territory, a fair amount of traffic connected Bismarck to the Black Hills of South Dakota.  This line followed that connection made by Sioux Indians, followed by General Custer, and followed even more frequently by stagecoaches.  Then came the trains, but they are gone too.

I like this old wooden trestles. If you get close enough to them on a summer day, you can smell the wood and the creosote.  In the winter, there’s not much smell, but you can still sense the presence of an old steam locomotive that once crossed these trestles to get across the mouths of streams emptying in to the Missouri River. 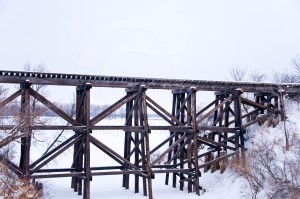