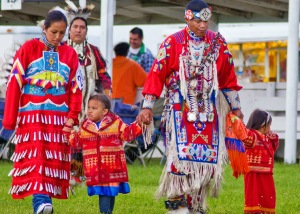 The family that dances together...

Can you imagine the hours of hand work that go in to these costumes.  The tiny beads that are threaded together to form a pattern, and then to outfit the whole family, including the growing children must take years of work. The families such as this one who make the powwow circuit invest a lot of themselves in their family tradition.

The Twin Buttes Powwow is  a cultural, social and spiritual event, not one for amusement nor as a tourist attraction. It’s a generational event passed down from countless generations. Thanks to the federal government that took the land where the powwow once was held near the Missouri River, the powwow is now nestled in the buttes and bluffs next to Lake Sakakawea.   It’s not easy to find.  It’s not well advertised nor marked.  But the people who belong there find it year after year.  Though the federal government once cracked down on powwows and prevented them from their annual celebration, the tradition has survived.

I try to attend many of the annual powwows on the Fort Berthold Indian Reservation. There are at least five of them each year, but the Twin Buttes Powwow is my favorite.

It is as un-pretentious as you can get.  It’s authenticity is remarkable and humbling to a visitor like me. I can think of only one or two White European traditions that have carried on for so many generations: Passover, Chanukkah, Christmas, Easter remain but perhaps altered by commercial and societal influences.  Not so with this powwow.

I didn’t get to stay for more than a couple of hours this year, only long enough to greet a few friends, and to see the pageantry of the Grand Entry.  I was fortunate that the light was subdued and even so the photo-ops were even and colors equally visible, neither blown out nor hidden in shadows.

If you care to join me next year to sample a modern celebration of ancient history, let me know. Bring your camera. Let’s go!