That happened to my dog Gunnar on our last hike of the year. 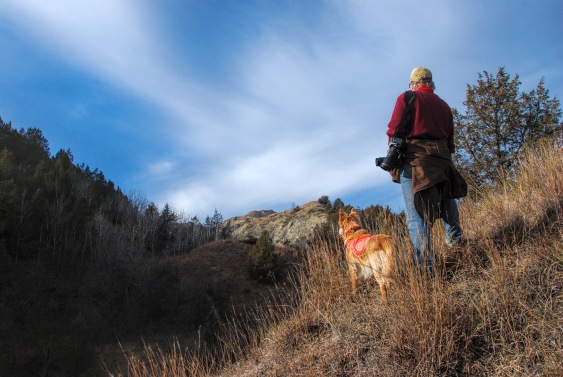 Looking up at a distant hill, we start plotting our course. The public lands of the Badlands provide good hiking territory for dogs and their owners — with a few dangers such as porcupines, skunks rattlesnakes and coyotes

Thanksgiving is generally my last day-hike of the year. This year, the destination was the Little Missouri River Valley near where it empties in to Lake Sakakawea between Killdeer and Mandaree.  The bluffs, buttes and hills are fairly rugged, so we picked our route carefully through the valley. 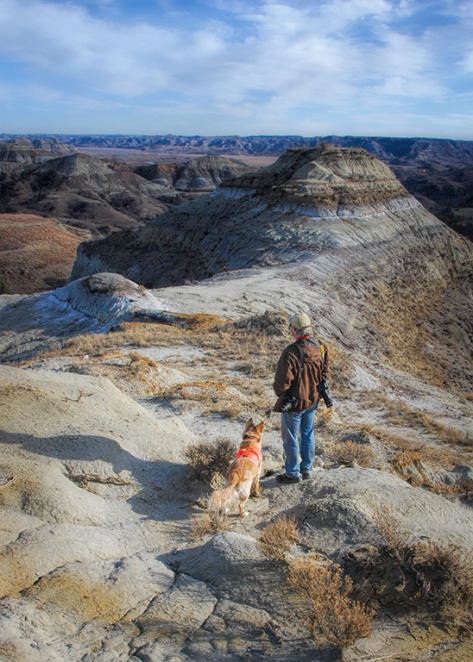 Typically, we follow hogbacks, or ridges along the tops of valleys to see the landscape and pick our course. Since hunting season was underway, Gunnar wears a hunter’s blaze orange vest.

We found fascinating rock formations, including a wall of rivulet erosions down the hillside. 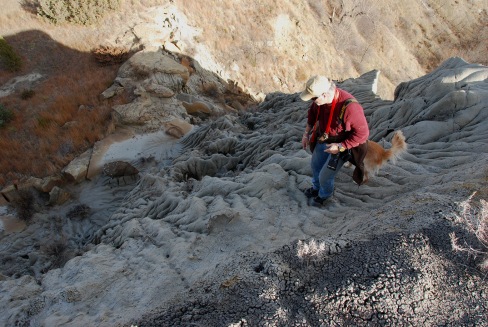 Looking down the steep hillside, we pick a course to follow to the bottom

That’s when the dog decided he’d find his own way down. 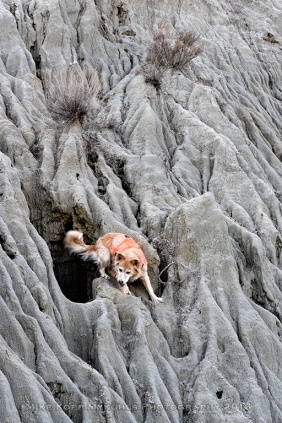 Gunnar picked his own route to the bottom, but discovered it didn’t get him where he wanted to go.

Happily he scampered down…part way. Only part way.  He stopped.

With only a dozen feet to go, he came to an “Oops” moment.

Now what do I do?

He looked left, right, down and above.  He decided to just sit until the photographers did their things. He looked perplexed. He waited for the rescue squad to come in and help. 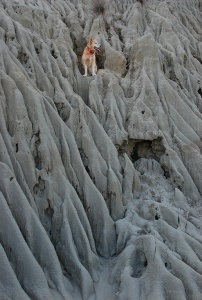 Recognizing his route to the bottom did not work, and that he could not climb back up, Gunnar stopped to look around

It really didn’t take much. I grabbed his shoulders, firmly, securely so he knew I had him. 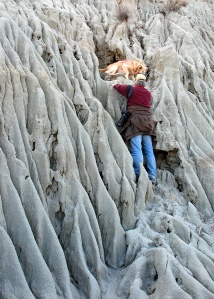 I climbed up to give him the physical security and guidance he needed to climb down from his perch.

I lowered him a bit down and he was saved! 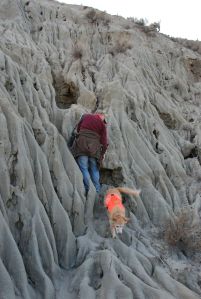 Once he was coaxed off the rock ledge, he continued to make his own way down

You know, I think there’s a sermon illustration in there somewhere. 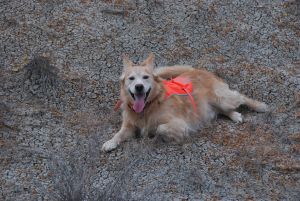 When Gunnar got to the bottom of the rock wall, he decided he’d had enough exercise and just wanted to rest. 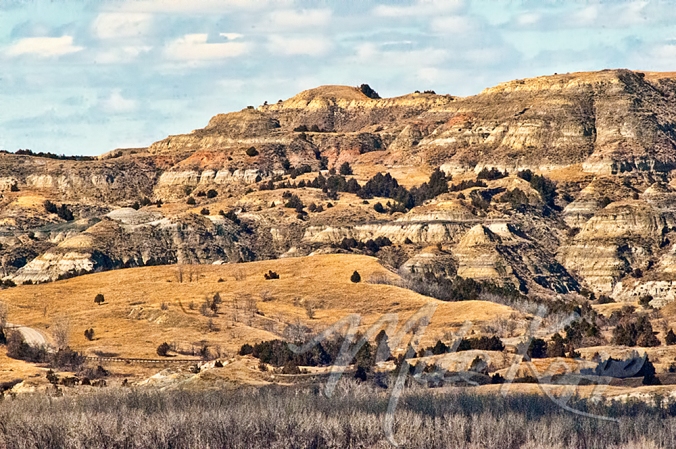 Hiking the Long X trail, you will wander over more than a mile of trail but only gets you one mile further in to the Badlands.  It’s the most primitive part of what is elsewhere a full access gravel road.  The gravel road may seem to be a short cut, but it’s actually the long cut through the Badlands wilderness between civilized areas.

It starts as a wandering path as though some critter aimlessly wandered about.  It’s old folk lore — the calf’s trail. I found the calf’s trail, or the Long X trail along the Little Missouri River, and sure enough, it wanders on a path so crooked it’d break a snake’s back.  Folk lore says that’s how highways start. Sam Foss wrote the words:

One day through the primeval wood

A calf walked home as good calves should;

But made a trail all bent askew,

A crooked trail as all calves do.

Since then three hundred years have fled,

And I infer the calf is dead.

The calf’s trail I follow every year is a primitive extension of the Long X road. It zigzags through wilderness following the Little Missouri River which flows north from Wyoming and Montana in to North Dakota to the Missouri River. The Long X hiking trail never quite evolved to highway status, but it’s well-marked.

Each day a hundred thousand rout Followed the zigzag calf about.

And o’er his crooked journey went The traffic of a continent.

A hundred thousand men were led, By one calf near three centuries dead. 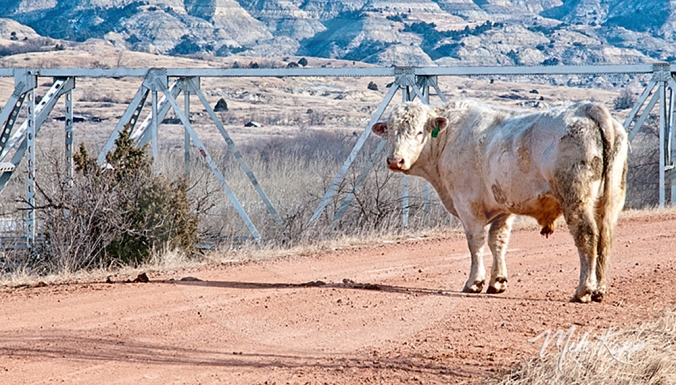 The name, “Long X,” is branded on a bridge, a trail and a road. It is from a famous cattle ranch on the Little Missouri River that pre-dates North Dakota’s statehood.  It was the north end of a cattle trail that dangled southward to Texas.  It’s gone now, but the name remains.

For decades, I’ve explored the valley where the Long X Hiking Trail threads. I always took with me my Austrailian Shepherd. Often other companions joined the dog and me — my daughter or son, or a friend. We relied on our sense of direction to get where we wanted to go — and get back again.  We’d keep one eye on the easy-to-follow Long X Trail, but we struck out on our own, running a parallel course between the Long X Hiking Trail and the Little Missouri River.

To get to the trail head, start at the Long X Bridge, south of Watford City. It’s south across the river from where the Long X Ranch once stood, 150 years ago. Drive a short one mile road to the CCC Campground named for the Civilian Conservation Corps, built in the 1930’s. 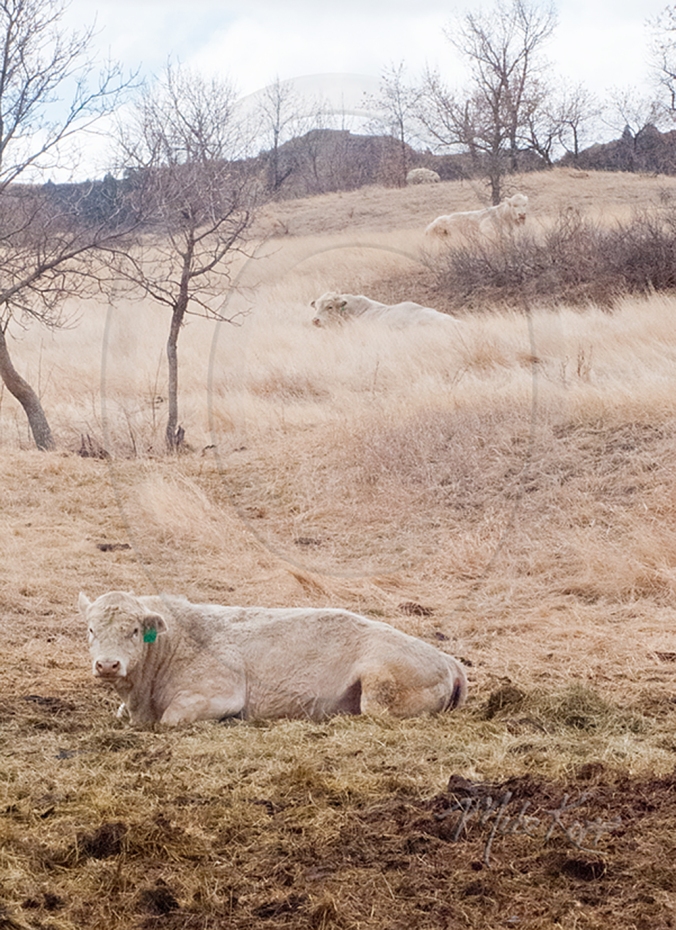 To get the Long X trail head, you’ll drive through grazing or resting Charolais bulls.

Leave your vehicle; that’s as far as it will go. Now travel like the wandering calf on the Long X Hiking Trail, a well-marked adventure for those on foot, on bike or on horse.   (I’ve actually cross-country skied it in younger days.)   It’s marked by sign posts and directional markers such as these three that tell you where you stand and where you can go, if you want to follow the trail. 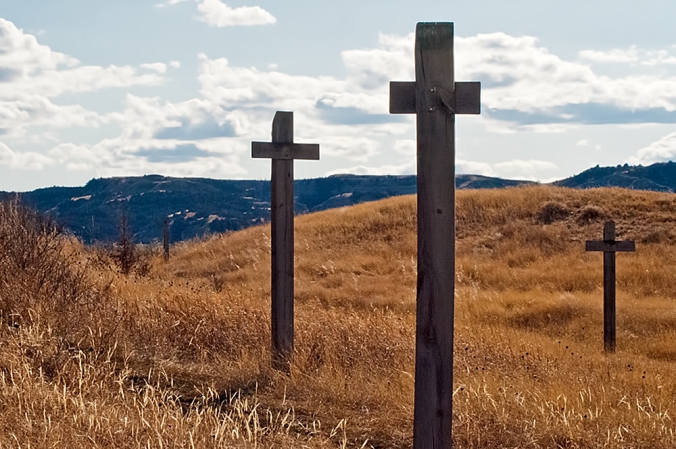 Long X trail head markers point the way down the trail, or to the Maah Dah Hey trail.

If you’re comfortable and can read nature’s signs, you can strike out on your own.  First-timers can safely follow the trail.

The Australian Shepherd is gone and so I don’t hike as much as I did when he was around. Still, I strike out a few times a year.  This spring, my hiking partner and I followed the general direction of the Long X Hiking Trail.  It was still early in the hiking season and the hills had not yet turned green, but at least they weren’t white with snow.

We stuck to deer trails because the marked hiking trail went up a valley where didn’t want to go. We spent most of an afternoon exploring the challenges of hills and bluffs that bank the valley carved by the Little Missouri River. After a few miles of flatland hiking on the valley floor, we picked a butte to climb to the top of the world. The view is restricted from the bottom of the valley, and we wanted to discover how far we could see from the top. 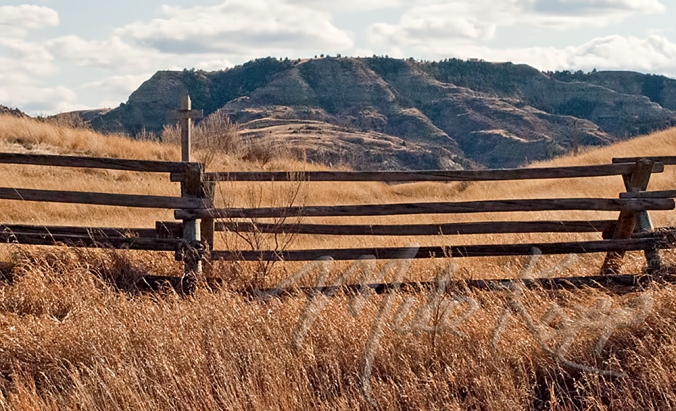 About a mile away, the hill we ultimately chose to climb.

It took two-and-a-half hours to climb the butte. Little switch-backs made the hike longer, but less steep.  Our spring legs, out of shape from a confining winter were not strong enough to tackle the butte straight up. Back and forth we threaded our way up the butte on a path like Singer Sewing Machine zigzag stitch. We stopped every 20 minutes to rest our legs and scope out the encouraging view of how far we had come.  It was more encouraging to look at what we’d accomplished, rather than to estimate the climb ahead. The labor was worth it. 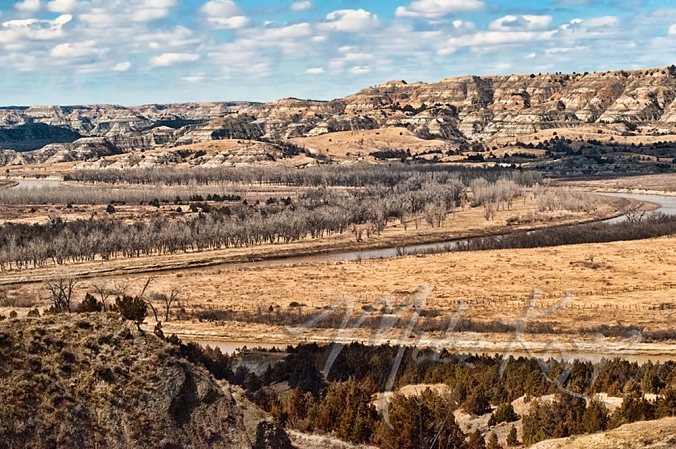 From on top we could see where the wandering calf trail called the Long X accompanied the Little Missouri River. “Magnificient” is the best word I can use to describe the view. “Endless” is another good word.  The bluffs and buttes extend a greater distance than I could estimate. 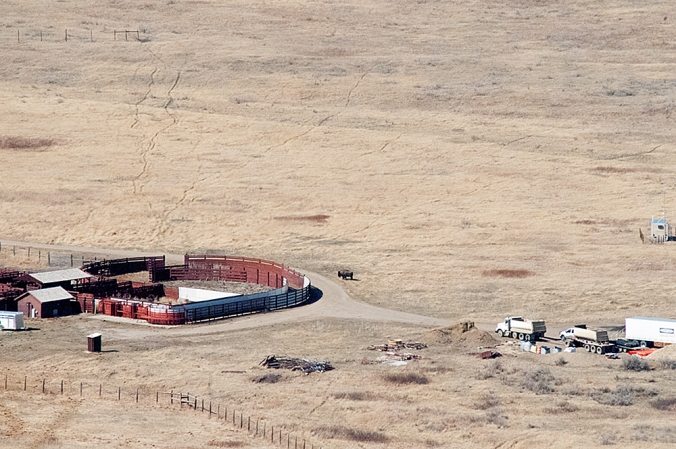 Theodore Roosevelt National Park corral across the river from us.

Not far off, we could see horses grazing peacefully.  Ranches and tourist points marked the view upstream along the river. . We scanned the distance with our cameras’ telephoto lenses, looking for herds of elk, big horn sheep or even a coyote.  In previous years, I’ve spotted all of them. What is spooky, though, is to know that this is also mountain lion country. The state estimates some 300 roam this region.  I wonder how many have lay hidden watching me in the same way that I sat on top of this butte watching the world below. 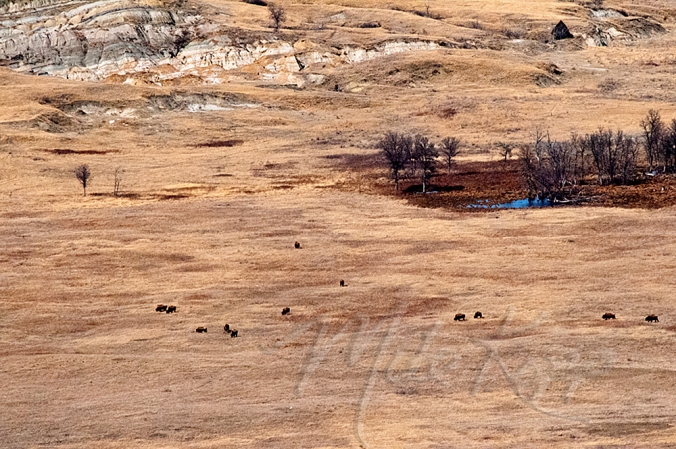 What caught our attention and entertained us for much of our rest break, was a sober reminder this ain’t the days of the wild west. A mere splinter of what was once lumbering herds of millions of buffalo grazed below us. A dozen head is all that are left in this valley to graze where 200 years ago, the land was literally covered with buffalo. Lewis and Clark, then a few years later, George Catlin painted and wrote of buffalo herds that could not be numbered — probably in the millions.  The Bismarck Tribune in 1880 reported that 2 hunters shot nearly 100 deer and antelope and 15 elk. Elk were so plentiful, the Tribune wrote that the two men shot 11 of the elk in about 15 minutes.  From our perch on the top of the butte, on the grassy mesa, we could watch across the river where a few head of buffalo grazed at the North Unit of the Theodore Roosevelt National Park, but no elk.

With a bit of imagination, we could picture what it must have been like to ride across the grasslands to this great gorge and then to spy big black beasts — too many to number. Only a few head of the massive herd would be needed to feed, clothe and house the tribe or clan of Mandan or Hidatsa that lived in this area hundreds of years ago.  The tribes considered the buffalo to be their spiritual kin.  They thanked their gods for the provisions that the buffalo supplied, hides, meat, tallow, bones — all of which they used to live hundreds of years ago.  Today, buffalo are just a tourist spectacle. 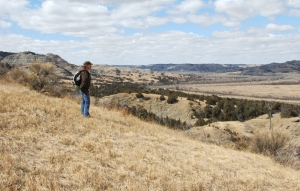 The view from the mesa above the valley stretches for miles

We rested for nearly an hour at the top of the world. We talked and gazed across the region. The high-energy food from our backpack refueled our exhausted legs.  We drank the cold water we brought. We snapped several photos from our perch above the wandering calf trail.

When we left, we let gravity do it’s work. Two and a half hours up, but 45 minutes to get down.  We slid, fell, jumped until we were back at the bottom of the valley ready to parallel the river to get back to our truck. In all, we’d gone only about five miles west.  The round trip took five hours. The marked trail is about 12 miles long; a savvy outdoorsman could follow it all the way across the state in to Montana and Wyoming. 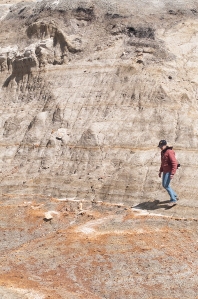 Our day hike gave us enough of a taste of what life used to be like. Intent on following all we could of the Long X trail and road, we looked forward to following the longest part of the trail. It reached eastward — and that part we could handle by pickup truck another day. Our next leg of the journey would take us from the 1880 Long X Trail to the 1935 Long X Road.

I’ll tell you about that next — it’s a route you may want to sample — by vehicle if you’re not up to extreme hiking.  Start at the Long X Bridge and  head east. Next time I’ll show you what that looks like.

Click through a slide show to see more images of the beauty of the Badlands at http://www.mykuhls.com/Beautiful-Bakken

Or on Facebook you can find more North Dakota Badlands at