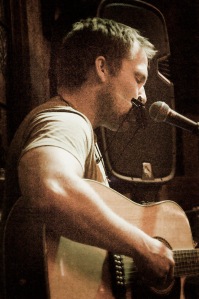 Music the way it’s meant to be enjoyed.

Even if folk/blues/jam music isn’t your cuppa quarter notes, this is the way music is meant to be enjoyed. Acoustic.  No wall of sound.  No towering speakers and a huge mixer board.  It’s pure. It’s authentic. It’s a quiet intimate atmosphere at the East 40 where Ben Suchy was playing on this night.

The father and son duo of Chuck and Ben Suchy says more about North Dakota than just a couple of music makers getting together on a Sunday afternoon.  As you may know if you’ve been reading North Dakota 365, the Suchys farm south of Mandan. They’re quiet, unassuming people who diligently go about their work.  Chuck has been at it long enough he is easing out of the farm, passing it on to the next generation, Ben’s siblings.

Chuck is also known as the North Dakota troubadour. He writes his own music, lyrics and  melody.  His lyrics tell stories, perhaps of a 1928 Indian Chief Motorcycle, or of a family matriarch whom everyone can relate to.  If you listen to Garrison Keilor’s Prairie Home Companion, you’ve heard Chuck sing his stories.

On this Sunday afternoon, the father and son duo were on the patio of a local watering hole on the banks of the Missouri River in Mandan.  They played solo and they played as a duet. They played as a team as equals who share a common gift, the gift of song.

These are the kind of summer days that make memories in North Dakota. They’re the kind of days that get you through the long cold winters because you know in a few months, you’ll be back out on the patio, listening to Chuck and Ben sing the stories of life on the Northern Plains.  They carry their music all across the Midwest.  Have you had a chance to hear them?

Sushi, Sake and Suchy at the East 40

Monday nights means Ben Suchy night at the East 40 in Bismarck.  They call it Sushi, Sake and Suchy night.

Ben is a product of North Dakota’s bohemian culture, both in terms of society and in terms of ethnicity.  I’ve written about him before here on North Dakota 365, and probably will again.  He’s one of my favorite people and musicians. He’s a songwriter, balladeer of the folk/blues tradition who plays harmonica, banjo and guitar.

On this evening at the East 40, the late day sun streams through the stained glass windows behind Ben.  Overhead are actually blue lights, but the powerful yellow of the window sets the overall color of the photo.  If you look closely, you can see the blue cast around Ben from the overhead lights.

It’s some of the best times of the year, a late summer evening, still sunlit, good food, good friends and good music.  It’s no wonder that even grownup girls like to goof off.  When I asked permission to shoot their photo, they had to ham it up for the camera.  They’re pose is a good representation of play time on the Northern Plains.

Bismarck is blessed with a hidden resource. Among all the hard-working, no-nonsense cultures of the region (Norwegian, Germans, Ukrainians, Native American) are points of entertainment and creative expression.  Ben Suchy is one of those.  Ben comes from a hardworking family of Bohemian descent who farm and ranch south of Mandan.  they’re a hard-working dirt-under-the-fingernails kind of earthy family. But they’ve been blessed musical talent.  Ben’s dad Chuck is frequently heard on Garrison Keillor’s Prairie Home Companion as the North Dakota troubadour.  Ben’s sister with the Dollys is also on PHC.  Ben makes his appearance there as well with his blend of reggae, jazz, folk, blues.

During North Dakota’s long winters, Monday nights Sushi and Suchy at the East 40 Chophouse in Bismarck is a place to escape the hardness of life on the Northern Plains.  There, you can hear the exquisite sounds of Ben as he puts his interpretation to songs of Jack Johnson, Taj Mahal, Neil Young and others.

Ben is only one of the many talented musicians in North Dakota. There are too many cover bands and bar bands that try to pass themselves off as musicians. Ben and other like him are the real thing. 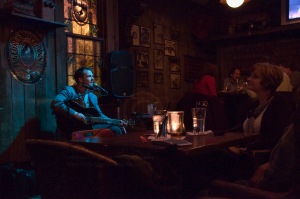 Ben Suchy at the East 40

Here’s a dedicated talented musician. Ben Suchy, every Monday night has a gig at the East 40 Chophouse in Bismarck.  He plays his folk/blues/bluegrass/jam music every night to a cozy crowd in the bar at the Chophouse. Ben has a couple of recordings on the market and if you like musicians such as Jack Johnson or moe or Neil Young or Taj Mahal, you’d like Ben.  He comes from an extremely talented farm family south of Mandan.  If you listen much to Prairie Home Companion with Garrison Keilor, you may have heard Ben, or his sister Andra or his dad Chuck, the North Dakota Troubador.

Getting this shot was not easy for me because I don’t have a very fast lense that does well in dark locations.  I took several shots, and this turned out the best.  During his next break, Ben came over as he always does, and we chatted a bit.  A group of guys gathered at the table and shared a pizza.

Ben is the kind of son anyone would be glad to have, a tribute to hardworking, high-quality Americans.  Raised on the farm, he knows how to work and when he’s not making music, he’s making his way as a landlord and making his way in the real estate business.  I’m glad to know a guy like this will be taking over the next generation of leadership.