Get out of your vehicle to explore the Badlands, the Bakken Oil region of North Dakota.

Near the Ice Caves along the Maah Daah Hey trail, two bicyclists navigate the easy part of the ride, through the grass before hitting the trail

Exploring western North Dakota outside the comfort of your vehicle is possible for nearly everyone. You can pick a comfort level on the Maah Daah Hey Trail and enjoy the region that matches your physicality.  Portions of the trail are wide, easy and flat through the grasslands.

The turtle markers of the Maah Daah Hey trail guide travelers along the prepared route, but you don’t have to stick to the trail, you are free to wander on public lands.

Other portions are challenging. The Deuce is a bit of both. It’s not even a year old yet, but it’s getting a fair amount of attention.

Next to the Deuce trail, an outcropping of rocks, a shelf, invite hikers to walk along the side of a butte.

Custer Trail, the route of the 7th Cavalry passes by the Deuce

It starts south of Medora near the Custer Trail and is about 40 miles long, and extension to the south of the original 100 miles to the north. Its real name is Maah Daah Hey II, the second reach of the world-famous cross-country trail. It snakes across hills and valleys until it reaches near Amidon and the Burning Coal Vein.  At the south end, the trail, as we explored it last winter is fairly easy. Like the 100 miles to the north, the trail is great for hiking, biking and horseback riding. With a series of camp grounds on the route, a multi-day hike, bike or horseback ride will now take a person 140 miles from near Amidon in the southwest to near Watford City in the northwest. Previously it was about 100 miles from Medora north to near Watford City. Easter Sunday, we looked for an early-season hike to celebrate Resurrection Sunday in God’s creation.

Out of curiosity we  first took a bit of a detour before heading out on the Deuce.  We drove toward the Little Missouri River, following map markers to check the Custer Trail.  If the Forest Service map is correct we drove a quarter-mile or so on the actual trail, then got out and walked where Custer and the 7th Cavalry crossed  the Little Missouri River.  On the other side, we could identify the pass on the west side of the river where the 7th Cavalry undoubtedly marched to Little Big Horn. Then we doubled back to catch a good start place on The Deuce, parked the truck, packed our day-packs and camera gear and started out on an easy grassy stretch—for a while. 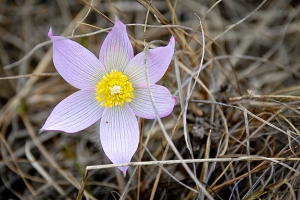 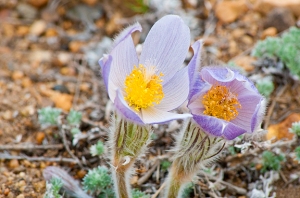 The Deuce starts out gently as grasslands before getting in to rougher terrain.

We used the Forest Service map of the National Grasslands, checked the topography of the region and found a place where narrow lines on the map indicated steep terrain. At first it didn’t seem accurate because the start was so easy and flat. Then the valley opened up to some of the greatest hiking in the southern part of the Maah Daah Hey. (Generally speaking the southern sections of the Badlands are smoother, less rugged, and “older” than the northern end.)

The valley along the Deuce to the west. The red hills are scoria.

We didn’t go too far, just a couple miles, but in that space we came to the kind of terrain we were looking for. The narrow, hill-hugging trail wrapped around a butte, along a ridge and over a crest to give us a view of miles of The Badlands, the Bakken region of North Dakota. 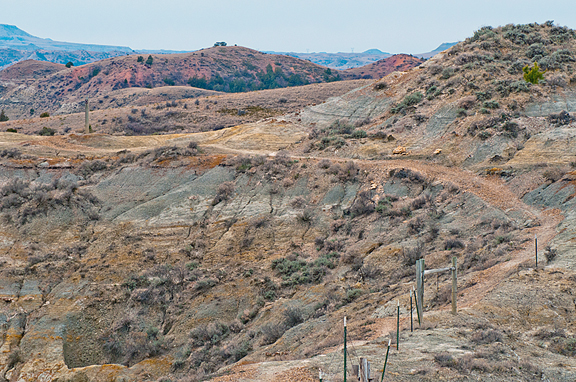 The Deuce wraps around a bluff and follows a narrow ridge.

Our Easter Sunday ham (sandwich) dinner and communion were in a sheltered area high on the ridge and out of the wind. 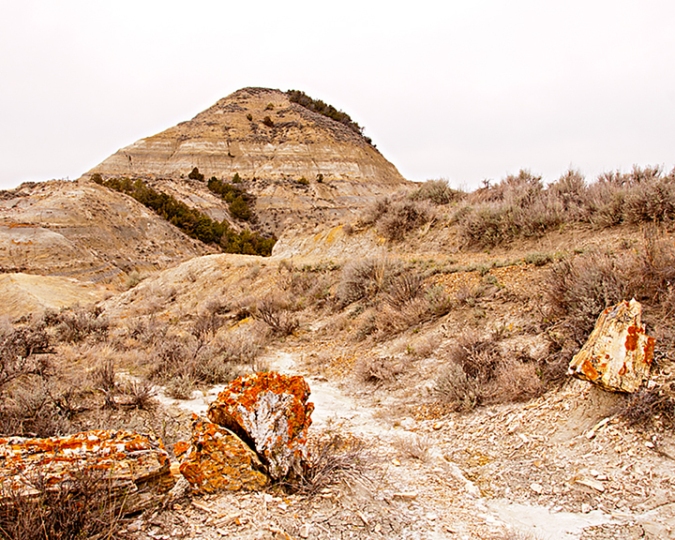 From there we could look back to the pass where we had been earlier that afternoon, where the Custer and the 7th Cavalry crossed the Little Missouri and headed west through a pass.

In the distance, the low cut of the hills is likely where Custer and the 7th Cavalry marched nearly 140 years ago.

We could look the other direction and saw a reminder that it is not 1876; a Burlington Northern train pulled its way from Fryburg to Medora before heading west to Montana.

It’s our intention to go back to The Deuce to follow it closer to the Burning Coal Veins.  It’s a worthy addition to the Maah Daah Hey trail.  What would it take for you to explore The Deuce? Get more tips to visiting the North Dakota Badlands. Follow me here on Facebook at Beautiful Bakken https://www.facebook.com/beautifulbakken Or check out the website featuring western North Dakota and Badlands http://www.beautifulbakken.com