General Sully, I disagree; I see this as heaven on earth

One of the things that seemed to pass from father to children is the love of the wild.  I don’t mean wild parties, but the wild, the wilderness, the outback.  In this part of the world that means The Badlands.  General Sully said they looked like what he imagined as “Hell with the fire burned out.”  I disagree with General Sully.

My son Caleb is an accomplished wilderness explorer, primarily the Boundary Waters Canoe Area where he kayaks, canoes, hikes and camps with others who are up to it.  This would be his first foray in to the Badlands of North Dakota and a different style of survival. Here in the Badlands, water is as rare as it is plentiful in the BWCA.

We weren’t sure where we’d find to camp. We thought we might hike in, set up a base camp and hike out from there. So, we packed just a few essentials when we left my home in Wilton. 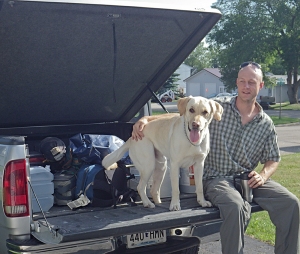 Shelter, food and water for two men and a dog.

We took a back road in to a region south and west of Grassy Butte.  It’s considered wilderness by the fact there are only a few people in miles and miles of range land, and very few roads.  After negotiating a two-track trail through grass and over rough 4-wheel-drive terrain, the road finally opened up so we could relax and get out to inspect the mud collected on the bottom-dragging Ford.

We did not expect to find good camping, so we felt blessed to discover Magpie Campground along the Magpie Creek. We were the only ones in the entire camp!  It meant we coulda brought more supplies, a cooler and food for real meals.  Instead, we brought only the bare survival supplies. We brought no firewood because we didn’t want to have to carry it in to a base camp. So, one of our first tasks was to gather firewood from the dead scraps in the draws near the creek.

The first times Caleb and I camped was more than 25 years ago. He was a pre-schooler and we camped along the Missouri River in Mandan.  Now as a grown man, he was more skilled at handling the camp master duties. 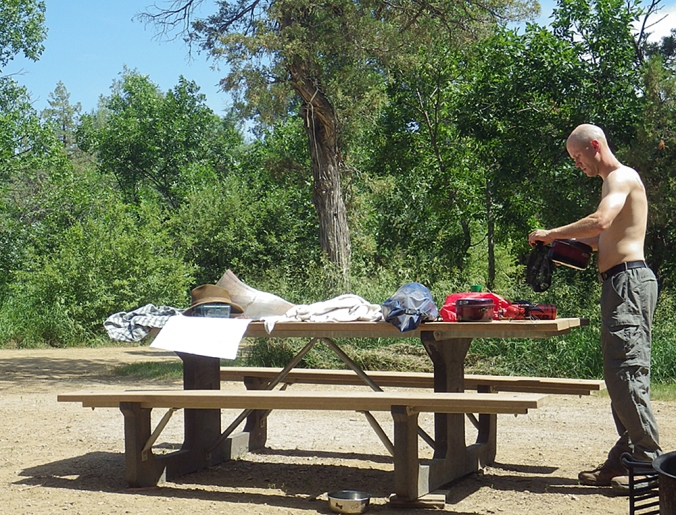 But we weren’t there to sit around the campground and so we headed out for our first hike and no little bump in the ground was gonna do it for us.

A little bump in the ground

We were headed for something much bigger. Our legs were fresh and our spirits high. We decided to tackle Castle Rock. Caleb and his dog Shifty took right to it, heading up the steep slopes with little to grab on to but only an occasional mudslide shelf for footing.

Up the side of Castle Rock

Shifty the dog seemed to find the best route for four legs, but going up on two legs was more of a challenge.  After all, it was several hundred feet.

Not to be outdone, I had to follow suit, but being the seasoned Badlands Traveler, I knew there had to be an easier way. Sure, enough, I found a grass-covered mudslide slope to labor upwards.  Once at the top, I got my first panoramic view of the region.

Of course by the time I got up where I wanted to be, Caleb and Shifty were headed back down.  Yes, people do look like ants from way up high!

There! Down below! Right center, Caleb and Shifty beat me to the bottom

The view from the top of Castle Rock showed us the weather was about to change. So we hustled back quickly.  Storm clouds were moving in.

With only about 20 yards to go, the first rain drops hit.  We were in camp no more than 5 minutes when the full rain fell.  For me, the sound of rain on a tent is as sleep-inducing as a sleeping pill.  I slept through a storm of loud thunder echoing from hill to hill to hill.  Caleb soaked it all in from the safety of his tent.

Once it was over, we climbed out and headed to a new vantage point to see the back end of the storm move east toward farm country.

And as always, God marked the moment with a reminder of His promise, and I caught it, just for the record, you know.

Have  you camped in the Badlands? Do you camp at a campground or go primitive?