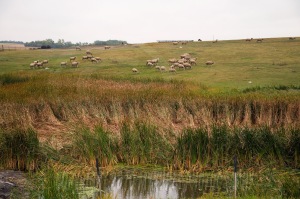 A sight not often seen in North Dakota — sheep on a hillside.  In fact, I can more quickly show you herds of domestically produced elk than I can flocks of sheep.   Even just down the road from this flock of sheep is an elk herd that I’ve attempted to photograph but have been unsuccessful.   In fact, every one of our neighboring states raise more sheep than does North Dakota.  Wyoming, South Dakota (4x),  Montana (3x) and Minnesota (2x) all out-produce North Dakota.

Yet between Wilton and Mercer is one flock of sheep that keeps the pasture tamed of most noxious weeds.  The sheep graze freely near an abundant water source, and I’m reminded of Psalm 23, “He leadeth me beside still waters.”

It was an overcast day when I shot this, the sun somewhere behind me which gave me about as good of light as I would get on this cloudy day.  It provided good even lighting with only natural color contrast and very few shadows.