What a find!  I didn’t even know this dam existed on the south edge of Washburn.  The snowpack is melting and rushing over the dam, about to carry with it a couple of chunks of wood.  Again, it’s the Golden Hour of the day. I walked out along the creek to the dam and laid on my stomach to get as close to the action as I could. 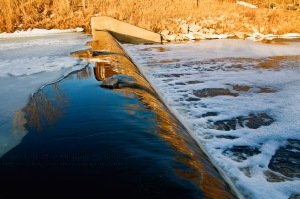 I like how the water is both clear and deep, but also rough and churning.  The reflections of the golden hour and the golden weeds along the shore add the right color contrast to the blue of the water. 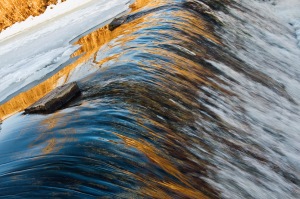 I’m not sure if I could capture such deep and contrasting colors of the water if I were to go back there later in the spring or summer.  I’ll have to find out and make a comparison.

I am certain the farm on the hill overlooking the creek, further upstream would be different later in the year, more green.  But I wonder about the stability of the bank. Will the farm get swallowed up some day by the erosive creek?